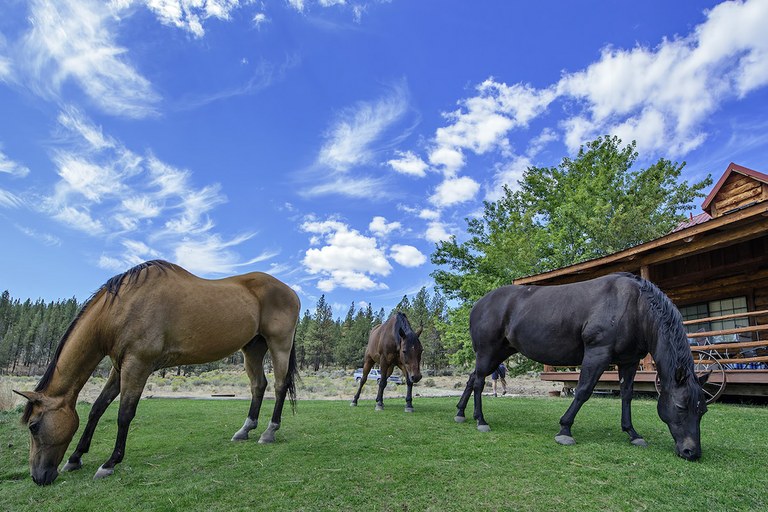 Hilde and Michael Baughman contribute to Writers on the Range, the opinion service of High Country News. They live in Ashland, Oregon.

A horse is the projection of people’s dreams on themselves – strong, powerful, beautiful – and it has the ability to allow us to escape from our mundane existence. —Pam Brown

Every morning at breakfast time, through our dining room window, down the hill and across the road, in fog, rain, snow or sun , we watch six horses come out of their stable. Immediately after stepping through a narrow gate, they run through a tree-lined pasture, and it seems clear that these animals are well aware of their strength and power, perhaps even of their beauty, and that once freed, they gallop happily just because they can. Pam Brown, quoted above, is right when she says that horses have qualities that many humans envy, and their mere presence can somehow provide us with an escape from our daily lives.

For decades, we have run and walked along the rural roads of southern Oregon and have seen plenty of evidence to support Brown’s claim. A remarkable number of 21st-century Americans who live in pastoral settings and can afford to build fences keep horses, often for no apparent reason.

Even though the iron horse began to replace the four-legged horse a long time ago and cowboys on horseback have all but disappeared, and despite the fact that industrialization has made draft animals almost obsolete, many people still want to own their own horses. Unfortunately, too many of these horse owners end up neglecting their responsibilities, resulting in the abuse and neglect of tens of thousands of strong, powerful and beautiful animals.

The half-dozen horses we love to watch from our breakfast table, along with dozens more, reside at Equamore Horse Sanctuary, a non-profit organization located a few miles east of Ashland, in Oregon. Equamore, which is funded by donations, has a mission “to provide a safety net for unwanted, abused, abandoned, neglected and aged horses who have no alternative for their care, while encouraging compassion and responsibility towards horses through education, awareness and intervention. “

In 2016, the county sheriff was called to a notorious property in southern Oregon, where horses were kept in poorly fenced pens, homeless, and often without food or water. The owner was persuaded to transfer a horse named Arlo to Equamore. Arlo was on the verge of death when he arrived at the shrine, weighing at least 300 pounds, with a concave rump, visible spine, and a mantle falling in patches.

But he survived to become what the Equamore newsletter, NeighSaver, described as “a magnificent black thoroughbred gelding with a regal allure and sweet personality”. Since 2016, four of the six horses that have remained on the infamous southern Oregon property have died, and so far the owner has not suffered any consequences from his negligence.

Another horse, Gandalf, was named after the mighty wizard of The Lord of the Rings. As a young stallion he joined a herd of untrained and unmanageable stallions and mares on private property in Northern California. By the time his owner agreed to hand him over to Equamore, Gandalf had been living his entire life doing his best to defend himself against the dominant stallion in the herd. Once he was safe at the sanctuary and the severe wounds inflicted by the domineering stallion had healed, Gandalf was castrated and grew into a healthy and happy animal.

The day we called to set up a meeting with Linda Davis and Ruth Kennedy, Executive Director and President of Equamore, they had just slaughtered a horse named Sara. “She was literally hungry when we took her in,” Davis said. “It’s always heartbreaking to see them go, they’re all like family, but we were happy to be able to give him 10 good years.”

“We have 56 horses here now,” Kennedy explained. “We used to adopt some of our horses, but the success rate was too low.” More often than not, he explained, they ended up with owners who were at least as irresponsible as the ones they came from. The estimate is that there are around 170,000 abused or neglected horses in America. Law enforcement agencies rarely offer much help. They have tight budgets and other priorities. A big problem is that horses are classified as cattle. Dogs and cats are so-called pets, so they are much more protected by law.

“There is no easy fix,” Davis added. “Our need to raise funds is relentless. But we’ve been doing what we can here for 27 years.

We took a slow walk in the barn before heading home. It was mealtime, and the only noise was that of satisfied horses chewing alfalfa hay.

More authors on the range

Spotlight on the genetics of a robust, high-altitude horse breed

What is your horse breed identifier?