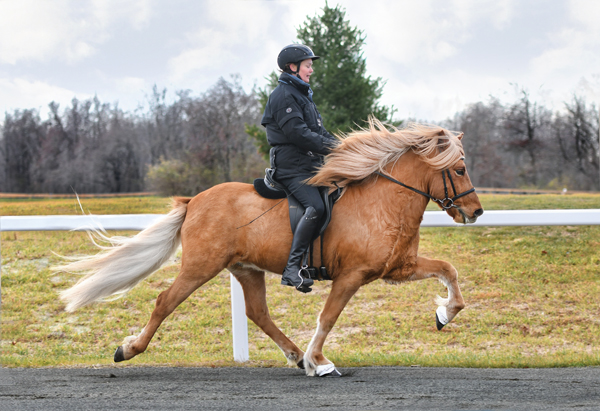 When Viking settlers first arrived on the island of Iceland in the late 800s, they must have been in awe of its stunning beauty. Huge glaciers, ancient volcanoes, roaring waterfalls and lush forests welcomed immigrant farmers, who brought their animals with them to their new home.

Among the cattle that made the journey from Norway were horses, ancestors of today’s Norwegian fjord. Other settlers from the British Isles soon followed, bringing in blood-carrying Shetland, Exmoor and Highland Pony ponies.

Over the next 1000 years, horses in Iceland remained isolated from the rest of the world. Without the infusion of outside blood and the need to adapt to Iceland’s harsh climate and rugged terrain, a distinct breed of horse was formed. Small enough to survive on the sparse native grasses that grow during the colder winter months, but strong enough to work on the farm and carry an adult rider, the Icelandic breed has become an integral part of Icelandic life.

Today’s Icelandic horses are the descendants of horses that have survived for centuries in this harsh land. Thanks to a law enacted in 982, no horse is allowed to enter Iceland, and horses that leave are never allowed to return. Thus, the Icelandic equine gene pool has remained pure for 1000 years.

Due to its special history, the Icelandic horse is truly unique in the equine world. Its long period of isolation, along with careful breeding by the Icelanders, allowed the breed to maintain a classic appearance, movement and temperament.

In addition to their compact form and shaggy mane and tail, the Icelandic has special gaits not seen in any other breed. Every Icelandic is born with the ability to walk, trot, gallop and gallop like other breeds, as well as perform the four-stroke tölt. Some are also born with another gait called the flying gait.

The tölt, the most comfortable of Icelandic gaits, is a lateral movement where at least one foot is always on the ground. The two-stroke flight pace is the fastest of the Icelandic gaits, with speeds reaching 30 mph. In Iceland, horses run at this pace.

The temperament of the Icelandic horse is as precious as its distinctive appearance and its particular way of doing. The ideal Icelandic has a very easy going personality and is virtually bombproof. The breed’s lack of dread dates back to its isolation in its native land where horses have no natural predators.

In Iceland, these horses are an integral part of the country’s tourism industry, offering rides through the spectacular countryside during the warmer months. Horses transport visitors over lava fields and volcanic landscapes, giving a perspective of Iceland that you can only get from the back of a horse.

Although Icelandic horses are the most numerous in their country of origin (around 80,000 currently reside in Iceland), 6,248 horses are registered with the American Icelandic Horse Congress (USIHC). They are valued in the United States as recreational, touring, and family horses.

In USIHC sponsored competitions across the country, the breed is judged at its five gaits according to the rules of the International Federation of Icelandic Horse Associations (FEIF). The FEIF is an association of 19 different countries where the Icelandic horse is represented, and is the international governing association for the breed.

In the United States, the United States Icelandic Horse Congress has a Recreational Riding Department that operates a Sea 2 Shining Sea Ride, which is a virtual ride where members log hours in order to travel to across parts of the United States.
Another virtual competition for all levels of riders is currently under development to help Icelandic horse owners stay involved in shows during the COVID-19 shutdown.

The Icelandic is a sturdy little horse with great strength, endurance and temperament. As its popularity continues to grow outside of its native Iceland, more and more people appreciate the unique beauty and talents of this special breed.

This article on the Icelandic horse breed appeared in the July 2020 issue of Illustrated horse magazine. Click here to subscribe !